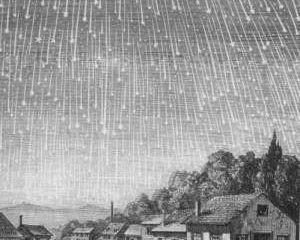 When you were a kid, ever have one of those warm summer nights when there was nothing to do, and you didn’t have any money to do anything even if there was something to do, and your folks wouldn’t let you do it even if there was, and you did? So, maybe you used to hang out with your buddies under the lamp at the end of the street, or maybe you used to climb up onto the hood of the family Ford alongside the house, lean back against the windshield and look up at the stars and wonder, as Huck Finn once said, “…whether they was made, or only just happened.” And maybe, too, did you get real lucky some times, and spot a few shooting stars?

Meteors!! They happen all the time, and there are even certain times in the year when we have great showers of them, events that occur when the Earth passes through a particularly cluttered region of the orbital path of a comet. And this year, on the night of August 11/12, if the weather holds out, we’re in for a treat!

On August 11, at 8 pm EDT, the peak of the Perseid Meteor Shower will occur, one of the year’s most spectacular. The Perseids are a particularly reliable meteor shower – very old and impressive. Since medieval times, the Perseids have been known as “the tears of St. Lawrence,” since they dependably show up every year at the time of Lawrence’s feastday on the 10th. In 36 AD, the Chinese recorded that “…more than 100 meteors flew thither in the morning.” But alas, not hither.

Nonetheless, the Perseids generally average about fifty ‘shooting stars’ per hour. This is also the night of the new Moon, so skies will be good and dark. Look toward the north-east after 10 p.m., as the constellation Perseus rises above the horizon. The Perseids are remnants of Comet Swift-Tuttle, first seen in the USA during the Civil War from the rooftop of the Naval Observatory in Washington, by a curious little man named Horace Tuttle, who never worked officially at the Naval Observatory, but hauled his little comet-seeking telescope up to the Observatory roof night after night.

August 18th, 1988. This is the Seventh Night of the Seventh Moon, according to the Chinese calendar. This is the night that thousands of magpies will form a bridge over the ‘silver river’ between the Earth and Heaven, and re-unite two young lovers.

Many, many years ago, the seventh daughter of the Jade Emperor peeked through the clouds that separate Heaven from Earth (although this was forbidden) and spied a young cowherd who’d sold himself into slavery to get enough money to bury his father. She was smitten, and with the help of her six sisters whom she swore to secrecy, she traveled to the Earth, got a Chinese scholar-tree to act as matchmaker, and married the young man. Then she asked her sisters to help her make a bolt of beautiful brocade, and with it bought her husband’s freedom from his master. They had two children. A boy and a girl.

Well, as these stories usually go, Dad eventually found out about things and wasn’t too happy. The Jade Emperor demanded that she come home, or all sorts of bad things would happen. She obeyed, and just to see that it wouldn’t happen again, he put a silver river between Heaven and Earth that none could cross.

As you can imagine, by and by the Jade Emperor softened with age and eventually came around. Sort of. He finally agreed that his seventh daughter could visit her husband and children by climbing down the bridge of magpies to the Earth. But only on the Seventh Night of the Seventh Moon. Which is August 18th this year.

If you look up in the Summertime sky, high overhead you will see the three bright stars that we now call The Summer Triangle. Vega is the brightest: the Seventh Sister. The other two are Deneb, and Altair, the cowherd. On either side of Altair are two faint stars. Look closely. These are the little boy and girl. Between them all flows the Milky Way: the Chinese ‘silver river’.

The Milky Way can be seen stretching clear across the sky if you’re in dark skies, from the Scorpion in the South, around up overhead through the Northern Cross, also called Cygnus the Swan, and also known as the great bird encountered by Sinbad the Sailor. Cygnus pierces the Great Summer Triangle, made up of the stars Vega, Altair, and Deneb. Deneb is in the tail feathers of the big bird, and will, due to Earth’s precession, be our North Pole star in some 8,000 years.