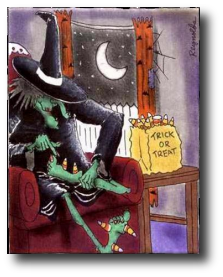 The last night of October was traditionally celebrated as the eve of Winter by the ancient Celts. Moreover, it was also the beginning of their New Year. In ancient Ireland, a new and sacred fire was kindled on this night, from which all the fires of Ireland would be lit. The Celts believed this date ‘a crack in time’, when the dead could revisit the living.
Astronomically Speaking

We are midway between the Autumnal Equinox and the Winter Solstice, the year’s Cross-Quarter Days. The Sun is now rising half-way down on the southeastern horizon towards the point at which it will rise in the dead of Winter. It is a cross-quarter day, and one of peculiar significance. This was the ancient pagan Feast of the Dead, when all sorts of things went bump in the night.
The Tradition Takes a Name

As in the case with most of these old pagan holidays. However, the Church came along and “Christianized” it all by naming 1 November the Feast of All Saints (All Hallows), and 2 November as the Feast of All Souls. And if it wasn’t already, All Hallows Eve, Hallowe’en, became regarded as unlucky and uncanny. This is because it was associated with paganism. Thus, during the middle ages, mumming became popular. Mumming is an act or mime where the players wear disguises and the poor begs for sweet soul-cakes. The cakes would be given as payment for prayers they promised to say for the dead. Children went from door to door, chanting:

Soul, Soul, for a souling cake,
I pray, good missus, a souling cake.
Apple or pear, plum or cherry,
Anything good to make us merry.

The alternative, I suppose, was to make them mad. It isn’t too hard to see where the current “Trick or Treat” originated, or to note that the prayers have been forgotten altogether.

Halloween is gonna suck this year!

In England and the USA, impersonation of the supernatural, the dead, or the just plain spooky has long been a tradition. That’s OK, but this ballerina, tramp, and princess business, has to go. We’ve retained the fire tradition. Fires lit to ward off evil spirits, in country bonfires or front porch jack-o-lanterns. But just when, or how, or why the astronomical significance of this date was lost, is hard to say. Hardly anyone remembers anything about it at all .

The jack-o-lantern may have had several origins. In the past I have dealt with some of them, but recently I found evidence of another possible origin: in Punky Night. A punky, from ‘pumpkin’ or ‘punk’ (tinder) is a lantern made by hollowing out a pumpkin or turnip. Then a candle is placed inside. The villagers of Hinton St George in England insist that “long ago” their menfolk went to the annual Chiselborough Fair and got too drunk on cider to find their way home. The village women-folk made “punkies”, set off in the night to find them, and eventually dragged them home.

The Moon is Waning Gibbous (96% of Full)