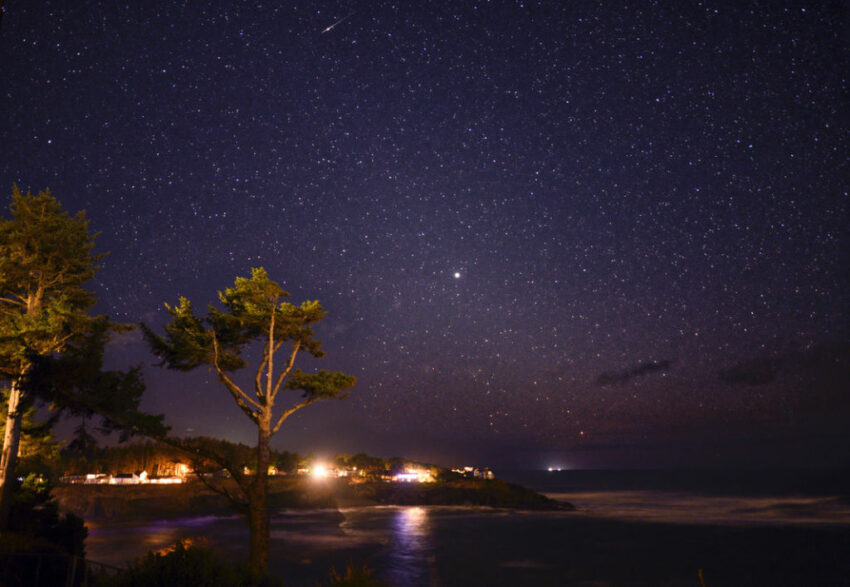 It isn’t easy, this star business, and it’s terrifically hard to learn the night sky in any season, unless you have someone with you who knows it well already, and can tell the tales that make the forgetting impossible. Well, January’s a good month to get started. Around 8 p.m. local time, there are constellations visible even in city-lit night skies that are easy to spot, packed up with the tales that should appeal to the kid in all of us. Start by facing South, and looking to the West…

That great diamond or square-shaped group of stars setting on its side on the western horizon is Pegasus, the winged horse of Greek legend, created by Neptune from sea foam and blood from the snake-filled head of his mother, Medusa, when Perseus slew her. Pegasus went on to become the favorite conveyance of a mere mortal named Bellerophon, and the two went on to various incredible deeds including the conquest of the dreaded Chimera, a really unique creature made of body parts from lions, serpents and goats. (See? This stuff is even better than Miami Vice, and just as complicated.) Eventually, Bellerophon got a little fat-headed, and when he demanded that Pegasus take him to Olympus to live as he thought he deserved, among the gods you see, the smart steed threw him – back to Earth, that is, where he wandered alone the rest of his days. Pegasus’ next job was thunderbolt carrier for Zeus, and this part of the story always bothered me. How does a great and powerful steed go from hero to pack horse?

Pegasus doesn’t look much like a horse to us today, but it does look like something a little more modern – a baseball diamond. Find the home plate star, Scheat, by looking for the three faint stars just around it, hovering like a catcher and 2 umpires. If you go to first base, and then down two stars and up two stars, you’ll locate a fuzzy patch of light in the right foul line. This is a galaxy, Andromeda, located 2 million light years away.

Now look over to the southeast. That big rectangle with 3 stars lined up in a row in the center is the the great giant Orion. Legends tell us Orion was a prince in an ancient kingdom in Greece, who grew to such an enormous size that he could walk on the ocean’s floor without getting his head wet. He became a familiar sight around the kingdom, lumbering along with his two hunting dogs, Canis Major and Minor, at his feet. These two pups can be seen just to the East (left) of Orion by locating the brightest star in the sky – that’s Sirius – which will get you the Great Dog, and looking just above him to another very bright star – that’s Procyon – which will get you the Little Dog. Well anyway, evidently Orion was a bit of a looker, too, because the goddess Diana fell in love with him, and swooned so that she took to forgetting to drive the Moon across the sky at night. Her brother Zeus fixed that, by one day challenging her to take up bow and arrow and see if she could hit that ‘log’ over there in the water. She killed her lover by accident, and placed him in the winter night sky in remembrance.

Orion busies himself these days looking upward to the northwest at Taurus the Bull, who can be found best by looking for an arrow-shaped grouping of stars called the Hyades Cluster, marked with the red star Aldebaran. Taurus is identified with the Bull that Zeus took the form of (so wife Hera wouldn’t know) as he wooed the maiden Europa. Just northwest of the Hyades is a group of stars quite often mistaken for the Little Dipper (although it is far too small, and in the wrong area of sky). This fuzzy cluster of 7 stars is the Pleiades, also located withing the boundaries of Taurus. The 7 sisters are supposedly in constant flight from Orion, who pursues but never catches them. In ancient Greece, the Pleiades rose when fair weather arrived, signalling the start of the navigation season in the Mediterranean, and are still called the Sailor’s Stars in England and Germany.

Just above (north) Procyon, and northeast of Orion, is the constellation of the twins, Gemini, marked with the stars Castor and Pollux. These boys were called twins, but were sons of different fathers, one mortal and the other not (Zeus, again), by the same Spartan queen – Leda. Together they went on the argonautic expedition that sought the Golden Fleece, and are considered patrons of navigators and warriors. Nice fellows.

Now what you want to do is look way over to the East, where a sickle-shaped constellation is rising. It is Leo, the lion, one of the few constellations that actually look like what they’re supposed to be. No one knows where or when this constellation was named Lion, but in ancient Egypt, it was when the Sun occupied this part of the sky in summer that prides of lions migrated to the banks of the Nile to seek relief from the oppressive heat. The Dendera zodiac, discovered in Egypt by Napoleon’s troops, shows a lion in this part of the sky, and the Egyptians were known to ‘borrow’ from even more ancient cultures.

The Moon is Waning Gibbous (96% of Full)