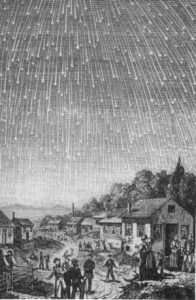 On the night of November 16th/17th the Leonid Meteor Shower will peak in the wee hours of the morning. This shower is maddeningly unpredictable.

In 1933, it was described as ‘like a child’s sparkler held against the sky.’  In 1966 it burst forth over the central western states in the greatest meteor display in recorded history. In other years, it has failed to show up at all.

The Leonid’s are the stuff of Comet Tempel – Tuttle, first seen in the United States from the rooftop of the Naval Observatory by Horace P. Tuttle, just as the Civil War ended. Given permission by the Superintendent to put his comet-seeking telescope on the Observatory roof, this curious little man was an inveterate comet hunter.

NOTICE !! A comet is wanted immediately. Apply to H. P. Tuttle. P.S. He must have a Tail.*

Comet Tempel – Tuttle has a period of 33 years. It was last seen in 1966. When the comet is in Earth’s vicinity the Leonid’s tend to get pretty intense, literally, so mark the year 1999 on your calendars. The name, by the way, is derived from the direction of the shower’s radiant, which lies in the constellation Leo.

*The above was derived from notes gathered by a USNO staffer who is working on a story of the life of H.P. Tuttle. Tuttle’s observing logs are preserved in the Naval Observatory Library. They are filled with the curious, amusing scribblings of an inveterate comet-hunter who observed even from the deck of an iron-clad during the Civil War. A bachelor all his life, he frequently signed his name in the shapes of small comets, and is buried in an unmarked grave in Falls Church, Virginia.

This news release may be reproduced, with credit please, to the U.S. Naval Observatory